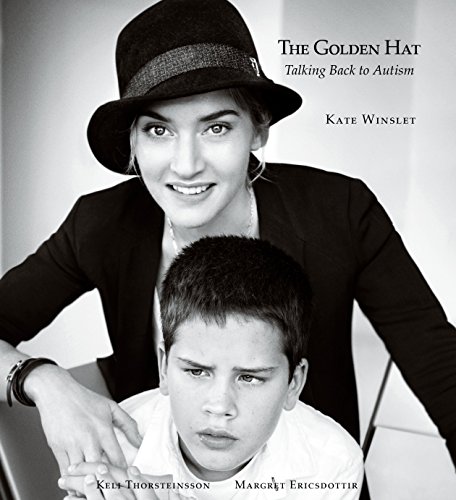 The Golden Hat: Talking Back to Autism

While making the English-language recording of the Icelandic documentary on autism, A Mother’s Courage, in 2009, actress Winslet befriended the film’s creator, Margret Ericsdottir, and her young son Keli, who suffered from severe nonverbal autism. At age 10, Keli, who had been unreachable and deemed to have a mental capacity of a two-year-old, suddenly found expression through the use of a letterboard, with the shattering words: “I am real.” In fact, Keli had been aware all the while yet unable to break the “locked bars” of autism. Winslet started up the Golden Hat Foundation—titled after Keli’s poem about a magical golden hat that could talk—as a way to generate money for the cause and create learning communities for the children; she enlisted the support of famous faces who agreed to photograph themselves with Winslet’s beatup trilby accompanied by a quote sounding in some fashion the urgency for expression. (Winslet’s quote: “I’m here, and I love you.”) From the first participant, Meryl Streep, through other familiar names often depicted in unfamiliar, stark black-and-white settings, all wearing or posing with the hat (John Krasinski wonders from the bathtub, “Let’s take a chance!”; Emily Blunt vogues, “Is anybody listening?”; Elton John grins, “I’m nobody, but I’m alive and I matter”; Woody Allen covers his face, growling, “Get off my property”), these are engaging, moving public gestures for a notable cause. Testimonials by autistic young people including Keli lend the entire effort warmth and sincerity. (Apr.)
close
Details