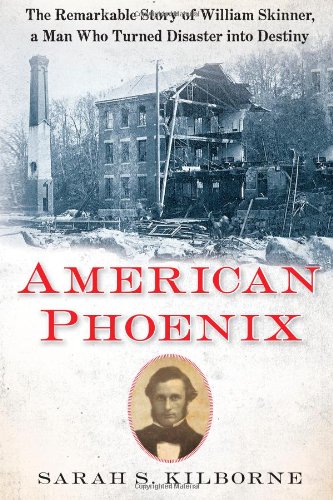 American Phoenix: The Remarkable Story of William Skinner, a Man Who Turned Disaster into Destiny

Alluring fabrics, a deadly flood, and rags-to-riches drama should beget a thrilling story. Instead, Kilborne's scattershot approach and overuse of surmise make for a drab bio of her great-great-grandfather William Skinner (1824–1902). Raised in poverty in London but skilled in silk dyeing and manufacture, Skinner built a fortune as a Massachusetts mill owner. In 1874, his mill and the village named for him were destroyed by the bursting of a dam of which he was part owner. Unlike other flood-zone manufacturers, Skinner abandoned the valley, fired his workers, disbursed relief funds inequitably (his brother got almost three times his due), and parlayed his reputation into a sweetheart deal with the Holyoke Water Tower Company, ultimately amassing even greater wealth. Kilborne, co-author of a children's book (Leaving Vietnam), excuses her ancestor's faults, saying, "When pressured, [he] instinctively became more creative, whatever the cost to others." Without detailing the era's other industrial transformations, Kilborne leaves readers wondering how much of Skinner's path to plutocracy was paved by changes in American manufacturing and what, besides his shrewdness and tenacity, there is to admire in him. Illus. Agent: Rob McQuilkin. Lippincott, Massie, and McQuilkin. (Oct.)
close
Details