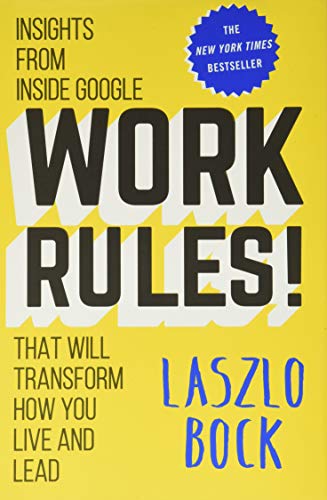 Work Rules! Insights from Inside Google That Will Transform How You Live and Lead

Bock, Google’s head of people operations, debuts with a book about how Google hires and manages its employees. Most people know about the company’s free lunches and shuttle services, but, according to him, there is more behind Google’s five-time Fortune ranking as “Best Company to Work For.” The company aims to “keep people in an environment of freedom, creativity, and play.” However, there are rules underlying this culture, and values underlying these rules, to each of which Bock devotes one of the book’s 14 chapters. Its bedrock is trust in the fundamental goodness of people. Some rules are easier to accept than others. For example, “given limited resources, invest your HR dollars first in recruiting.” Less obvious is, “Swallow hard and pay unfairly.” No matter the rule, however, its explanation is thorough. Regarding pay, Bock cites a “power law distribution” that proves “your best people are better than you think, and worth more than you pay them.” This book is for those who are curious about Google, but especially for business leaders, all of whom, according to Bock, would benefit from adopting these rules themselves. Anecdotes about Google’s founding and history mingle with discussions of management theory, psychology, and behavioral economics to create a fascinating and accessible read. Agent: Amanda Urban, ICM. (Apr.)
close
Details