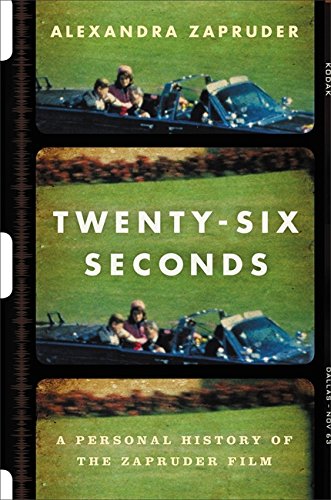 Twenty-Six Seconds: A Personal History of the Zapruder Film

This well-written exploration of conspiracy, propriety, copyright, and public good versus private gain is seen through the prism of the world’s most famous home movie. Sometimes “personal history” is code for lazy research, but Zapruder (Salvaged Pages: Young Writers’ Diaries of the Holocaust) has doggedly followed the tortured life of her grandfather’s short 8 mm film, which captured the moment of President Kennedy’s assassination, through the shock of witness, media frenzy, FBI fumbling, conspiracy theorists, lawsuits, artists, and Oliver Stone. At the center of the story is Abe Zapruder, who died when the author was an infant. An immigrant from Ukraine, Abe eventually found modest success as a dressmaker in Dallas. For him, J.F.K. was the symbol of American promise, so when he sold his film to Life, it was with the understanding that the magazine would safeguard J.F.K.’s dignity—and give Zapruder $150,000 for it. The movie was sold back to the family for $1, 12 years later, when it became too much of a burden for the magazine. And there it stayed until 1993 when the government seized the film, even though it was on loan to the National Archives. What follows is a dispassionate discussion of how much the film is worth. Zapruder doesn’t shy away from the fact that her family made money from the film, but it was the government that decided the “small, depressing, inconclusive, limited spool of celluloid” was worth $16 million, reaffirming its position as a true relic, one of the few in a secular world. [em](Nov.) [/em]
close
Details