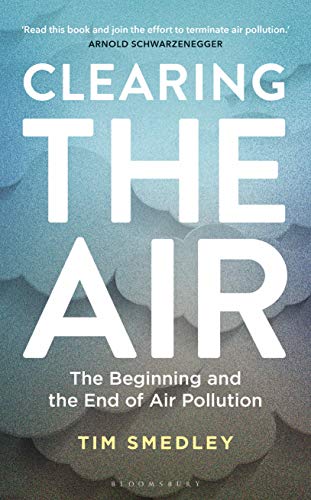 Clearing the Air: The Beginning and the End of Air Pollution

Journalist and first-time author Smedley challenges readers to take charge of their breathing space in this disappointing layperson’s guide to how ozone, ammonia, nitrogen dioxide, and other pollutants are poisoning the air and causing extreme health problems—smaller brain volumes, premature births, DNA damage—around the world, particularly in urban areas. He blames paddy fires, Diwali firecrackers, diesel engines, coal plants, wood fires, and just about everything that humans ignite or eat. “The reality is that most of us don’t know what pollutants we are exposed to on a daily basis,” Smedley warns, offering a crash course on particulate matter, “the tiny particles that float in the air, from road dust to soot, and cause the most damage to our health.” He discusses clean air battles in France, Germany, India, and the U.S., and visits Helsinki wielding a hand-held pollution monitor, but the predominantly British sources and interviewees give a lopsided feel to a global problem. Meanwhile, Smedley’s recommended fixes—for commuters to “quit our car habit,” cities to increase “green space,” and be more pedestrian- and cyclist-friendly, and governments to pass more stringent regulations—tend to the tiresomely obvious. This well-intentioned call to action is, unfortunately, unlikely to have much effect on an important public health issue. (Sept.)
close
Details