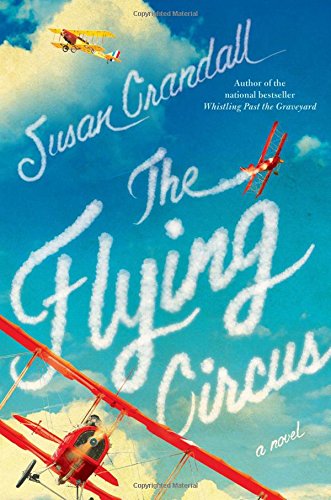 If the only flying circus you know is Monty Python’s, then Crandall’s nostalgic recreation of the heyday of the barnstorming stunt pilots who crisscrossed the U.S. in the 1920s will come as an entertaining surprise. Gil Gilroy, a former WWI flyer, Cora Haviland, a penniless heiress, and Henry Schuler, a teenage orphan fleeing a crime back in his native Indiana, crash into one another—quite literally—at a rural crossroads and eventually transform themselves into an act, traveling from town to town, with Gus doing stunts in his Curtiss Jenny biplane, Cora doing stunts on her motorcycle, and Henry acting as their mechanic. The only thing they have in common is a past they are all trying to escape. Things go along fine until Henry sees Gus and Cora kissing and is blindsided with jealousy. The three of them up the ante and join an actual flying show of aero-acrobats, in which Cora becomes a wing-walker, constantly trying to devise more and more dangerous stunts to attract larger crowds to the show. Cora eventually graduates to air racer, but the combined secrets from their past threaten to destroy their future together. All too often, the drama in the skies is overshadowed by the melodrama on the ground. Despite this, Gil, Cora, and Henry make for a sturdy romantic trio, and this old-fashioned novel plays like a refreshed mash-up of William Faulkner’s Pylon and the 1970s Robert Redford vehicle The Great Waldo Pepper. (July)
close
Details