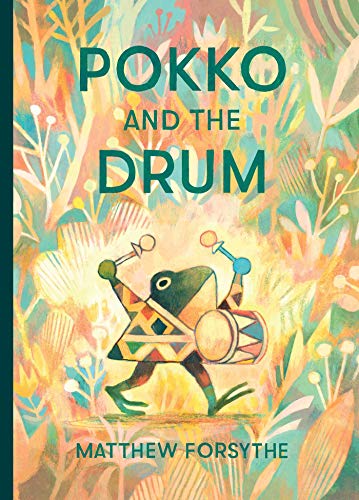 “The biggest mistake Pokko’s parents ever made was giving her a drum,” begins this dark, hilarious tale by Forsythe (The Brilliant Deep). As Pokko marches across the colorful bed the frog family shares, her sticks poised for big blows, her father expresses deep misgivings. The next day, he prevails upon her to head outside—“We’re just a little frog family that lives in a mushroom, and we don’t like drawing attention to ourselves”— and she does, venturing into the surrounding woods alone. After Pokko resists the forest’s silence, “tapping on her drum,” a banjo-playing raccoon falls in behind her; as Pokko plays louder, a rabbit with a trumpet appears. An eager wolf joins, too, with less-than-musical results (“No more eating band members or you’re out of the band,” Pokko orders). As the drummer plays, the parade grows, and pretty soon, it’s a throng, joined even by her noise-averse dad. Forsythe’s tapestrylike spreads give the tense, funny sequences a lush elegance marked by amusing visual asides, painterly interiors, and a triumphant parade. In embracing one’s own beat, Pokko discovers, extraordinary things can happen—surprising things, upsetting things, and glorious things, too. Ages 4–8. [em]Agent: Judith Hansen, Hansen Literary. (Oct.) [/em]
close
Details