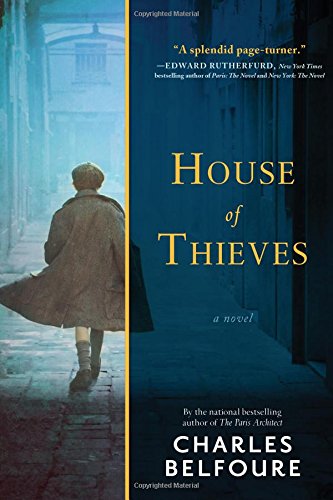 In this engrossing Gilded Age novel, Belfoure (The Paris Architect) fully immerses the reader in the historical setting and the lives of the characters. John Cross and his beautiful wife, Helen, are the relatively poor relations of prominent socialite Caroline Astor. Their behavior, and their children’s, must remain impeccable if they are to maintain their precarious position as Knickerbockers (old-monied aristocrats). Their eldest son, George, a brilliant mathematician—and gambling addict—may not live long enough to start graduate school at Columbia. He owes James T. Kent, the leader of the gang Kent’s Gents, $48,000. When Kent discovers that George’s father is an architect, he spares the son and forces the father into using his skill and blueprints to help execute a series of daring burglaries. Meanwhile, middle daughter Julia, about to make her debut, is no simpering miss. A hopeful novelist fascinated by Dickens’s Oliver Twist, she plans to attend Vassar, but when she lays her eyes on a handsome pickpocket, she too begins to live a secret life. And when 10-year-old Charlie ventures out of his neighborhood, he falls in with a slightly older newsboy who grew up fast. In a delightful turn of events, John’s confession of his involvement with Kent to Helen transforms the estranged couple into a criminal Victorian version of Nick and Nora Charles. Belfoure’s sly, roguish writing opens a window to those living both gilded and tarnished lives. The architectural knowledge imparted will appeal even to those who are unable to differentiate between Queen Anne and Ikea. Best of all, Belfoure holds together each and every thread of the novel, resulting in a most memorable, evocative read. Agent: Susan Ginsberg, Writers House (Sept.)
close
Details