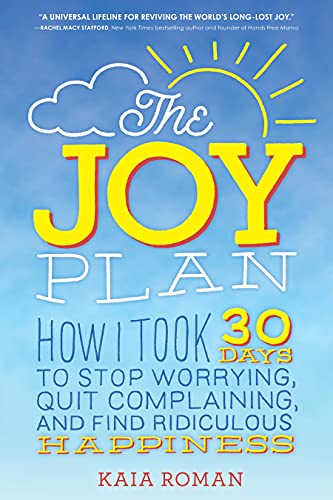 The Joy Plan: How I Took 30 Days to Stop Worrying, Quit Complaining, and Find Ridiculous Happiness

Businesswoman Roman presents an energized and informative plan for transforming your life, just as she transformed hers. When Roman’s startup unexpectedly closed shop, she was distraught until she heard about a new life practice based on the “law of attraction”: the idea that positive attracts positive. Roman decided to try it. This book charts the results of her successful first 30 days (and beyond) and includes Roman’s tips for creating a “joy plan,” inspirational exhortations such as “the optimist creed,” and the alphabet of gratitude. Roman makes transforming your life sound possible. All that’s required is that you shift your thoughts toward positive stories instead of the negative ones so many of us tell ourselves. Roman also identifies simple steps that readers can adopt, such as creating a vision board or writing a letter to a long-term partner. To skeptics of her approach, she cheerfully admits that “many people... wanted to vomit” in response to her “overabundance of happiness.” Just as many people, however, caught “the buzz from [her] joy.” Readers who keep an open mind throughout may become believers. Agent: Andrea Somberg, Harvey Klinger Literary Agency. (July)

This review has been updated to note the book's correct price and format.