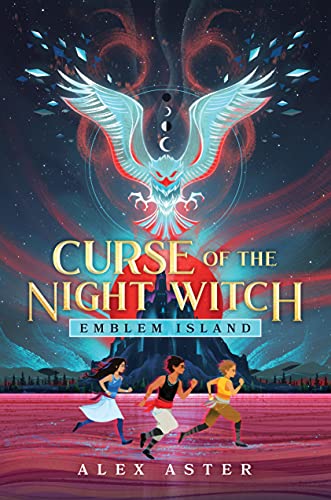 Tor Luna, 12, was born with a leadership emblem; the “two purple rings around his left wrist” signify that he will someday lead, just like his chieftess mother. Hoping to become a water-breather, instead—swimming is his great joy and source of calm—he wishes on the New Year’s Eve bonfire; during the yearly celebration, anything can happen. Instead of a changed emblem, though, he’s struck by a witch’s curse, one that cuts his lifeline, and his friends’, to a single week. To find the fabled Night Witch and break the curse, Tor, sharp-eyed Engle, and natural leader Melda venture through the most dangerous, magical regions of Emblem Island, using a volume of old stories, The Book of Cuentos, as their guide. Debut author Aster takes inspiration from Colombian folklore to craft a rousing series opener that’s both fast-paced and thrilling. As her protagonists face off against a host of horrors, they learn the value of friendship and explore the possibility of changing one’s fate in a world where destiny is predetermined. Excerpts from Tor’s Book of Cuentos grant further insight into the vividly built world’s monsters, legends, and cautionary tales. Ages 8–12. [em]Agent: Laura Bradford, Bradford Literary. (June) [/em]
close
Details