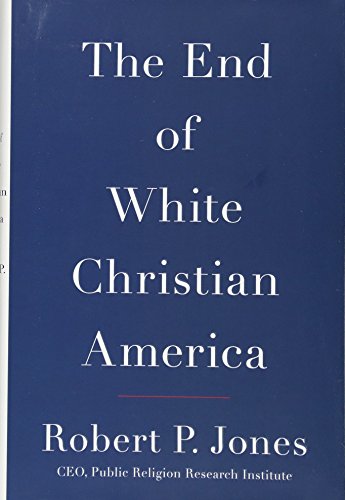 The End of White Christian America

Providing an obituary of “white Christian America,” a eulogy, and a look at stages of grief over its death, Jones, CEO of the Public Religion Research Institute and online columnist for the Atlantic, urges America to come to grips with the fact that it is no longer a nation composed mostly of white Christians. Jones follows the emergence and rise of what he calls white Christian America (WCA), often with some interesting, little-known tidbits, and then examines how that majority has disappeared. His thoughts focus on white men, however, leaving readers to ponder how discontented women play into the declining WCA numbers on top of the increasing numbers of non-white Christians. In addition, Jones never thoroughly considers whether Christians refusing to change their attitudes toward same-sex marriage, for example, might be doing so because of solid belief in the scriptures rather than because they don’t want to join non-whites who support marriage equality. Jones’s assumption that white Christians are having a harder time getting elected because they represent an old way of thinking fails to consider that voters might think those particular politicians are incompetent regardless of their race. The book is full of facts, figures, charts, and illustrations, but even as Jones opines that the death of white Christian America is a good thing, he never fully engages with the source of this transformation. Agent: Roger Freet, Foundry Literary & Media. (July)
close
Details