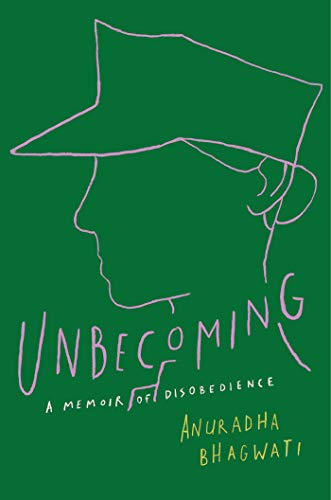 Unbecoming: A Memoir of Disobedience

First-time author Bhagwati pulls no punches with this uncompromising memoir chronicling her childhood as an obedient daughter of Indian immigrants, her time as a U.S. Marine Corps officer, and her work as a anti-sexual-abuse activist. After her graduation from Yale in 1998, Bhagwati—wanting a more unconventional challenge—enlisted in the Marine officer training school. As a female, Bhagwati was hazed more than men, yet she determinedly pushed herself to the physical and emotional limit, realizing much later that dealing with nearly constant sexual harassment had scarred her emotionally; after five years she decided to leave the Marines, and was honorably discharged in 2004. Postservice, Bhagwati was determined to take on the misogyny in the armed forces and hold the military to task for the sexual assault of females in the service; in 2007, she founded the Service Women’s Action Network, which advocated for equal rights within the military and for allowing women in combat. Bhagwati, as she passionately explains, took her battles all the way to Congress, encountering politicians she believed to be sincere (including U.S. senator Kirsten Gillibrand) and those who, in her view, had their own agenda, such as California representative Jackie Speier. Bhagwati’s candor and razor-sharp writing are in full evidence throughout her gritty and well-paced memoir. [em](Mar.) [/em]

Correction: An earlier version of this review incorrectly stated Jackie Speier was the head of an organization she wanted to merge with the author's.