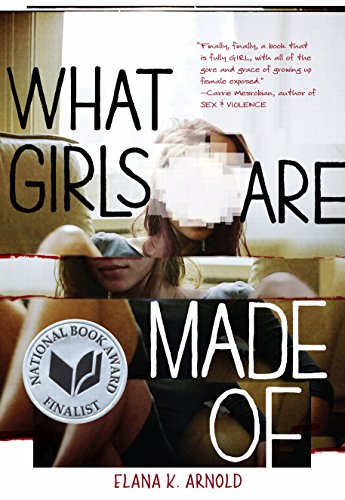 What Girls Are Made Of

According to nursery rhymes, girls are supposed to be made of sugar, spice, and everything nice, but Arnold (Infandous) knows that reality isn’t so pretty or simplistic. Her heroine, 16-year-old Nina, is made of body insecurities, few close friends, a willingness to do whatever it takes to keep her boyfriend, and an unsatisfying sex life in which birth control is her left for her to worry about. It’s not that this depiction rings false (would that it did) but that Arnold lays it out so baldly, and at times so oddly. Obsessed with female saints and their violated bodies, Nina writes short stories, interspersed throughout, that are a kind of Catholic magical realism—a saint is martyred for refusing to marry her father, a girl grows vaginas all over her body. Nina also stews over her mother’s claim that no love is unconditional, letting it drive her actions. In the end, Nina takes responsibility for herself, even things she’s not proud of, but while there’s much that’s laudable in Arnold’s novel, particularly her visceral portrait of girls as bodily creatures, too often the messaging feels forced. Ages 13–up. Agent: Rubin Pfeffer, Rubin Pfeffer Content. (Apr.)
close
Details