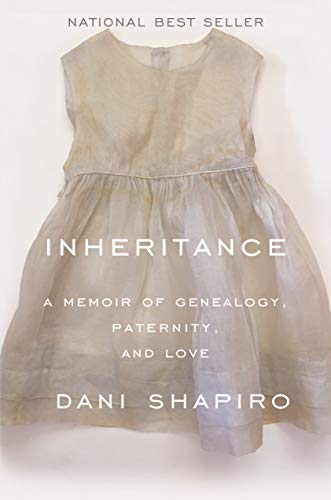 Inheritance: A Memoir of Genealogy, Paternity, and Love

In this fascinating memoir, Shapiro (Hourglass) writes of how she questioned her identity when a DNA test revealed that she was not, as she believed she was, 100% Jewish. Shapiro grew up in an Orthodox family in suburban New Jersey; blonde-haired and blue-eyed, she often felt out of place in a family of dark-haired Ashkenazi Jews, yet she had shrugged off the physical differences. But when she got the DNA test results, the then-54-year-old began researching her family history, and within months she unraveled a narrative leading back to the 1960s and the early days of artificial insemination. Her own parents had died, but now, with the support of her husband and son, she discovered her biological father, a doctor from Portland. Shapiro realized that her childhood, her ancestral lineage, and the foundation of her world were based on deception. “What potent combination of lawlessness, secrecy, desire, shame, greed, and confusion had led to my conception?” Shapiro writes. With thoughtful candor, she explores the ethical questions surrounding sperm donation, the consequences of DNA testing, and the emotional impact of having an uprooted religious and ethnic identity. This beautifully written, thought-provoking genealogical mystery will captivate readers from the very first pages. [em](Jan.) [/em]
close
Details