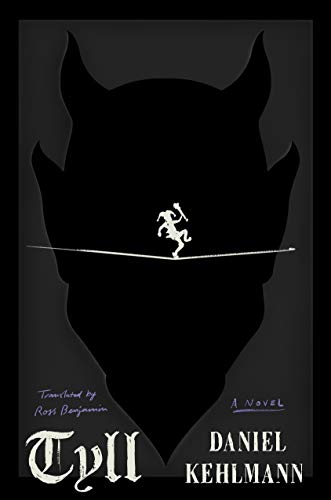 The latest from Kehlmann (Measuring the World), is a rollicking historical picaresque that follows the legendary trickster, acrobat, juggler, and jack-of-all-trades Tyll Ulenspiegel as he and his company make their way through a 17th-century German countryside gutted by the Thirty Years’ War. After his father, a miller in a small village, is executed by the Jesuits for heresy (courtesy of an unusually sympathetic hangman), the young Tyll escapes with his adopted sister, Nele, and becomes pupil to the wandering (and treacherous) entertainer Pirmin. Tyll’s ensuing adventures unfold over the course of eight distinct episodes resembling folktales, some of which put the canny Tyll in the foreground, while others feature him only as a witness to the main action. In this manner, readers meet the fat count Martin von Wolkenstein en route from the Viennese court in the thick of battle and encountering a slyly mocking Tyll in the forest; next, Tyll appears in the Hague as the court fool of the so-called “Winter King” Friedrich V and his queen in exile from their kingdom in Bohemia; and two unlikely traveling companions, the great mathematician Adam Olearius and the occultist Dr. Kircher (who is searching the land for dragon’s blood in order to cure the plague), find themselves guests of Tyll, Nele, and Origenes, their talking donkey—and these are just a few highlights. Located somewhere between German romanticism and modernism, superstition and science, history and high fantasy, this is a rapturous and adventuresome novel of ideas that, like Tyll’s roaming sideshow, must be experienced to be believed. (Feb.)
close
Details