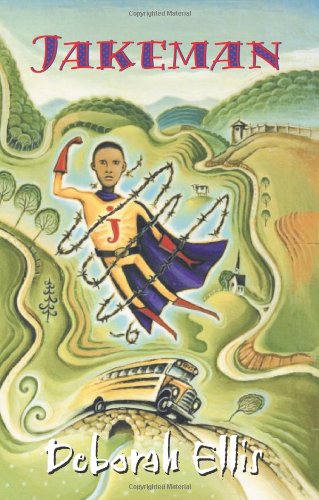 Ellis ( ) opens this uneven novel with a bleak scenario: on Mother’s Day weekend, 11-year-old Jake and his 16-year-old sister Shoshona catch a bus (driven by a frighteningly sadistic man) that takes a group of children to visit their mothers in a prison several hours away. Jake is an aspiring artist who draws pictures of “Jakeman,” his superhero alter ego, who is able to push barbed wire up through his skin (“pointed and painful, the best defense ever”). Jake also repeatedly writes letters to the governor, begging him to pardon his mother. During the siblings’ prison visit their mother criticizes Jake for having dirty fingernails, blames Shoshona for not taking proper care of him and laments the loss of her boyfriend, whose insistence that a stash of cocaine found in their apartment was hers landed her in jail. On the bus ride home, the story loses credibility: many of the children and the social worker in charge come down with food poisoning and the driver leaves them at a hospital. When the trip resumes, the now-drunk bus driver bumps his head and loses consciousness. Leaving him by the side of the road, the remaining kids take off in the bus by themselves. A series of unlikely incidents follows, culminating with a Mother’s Day confrontation with the governor that leaves Jake—acting as Jakeman—a hero. Despite some affecting moments, the tale’s meshing of the grittily realistic and the far-fetched makes for an unsatisfying combination. Ages 8-12.