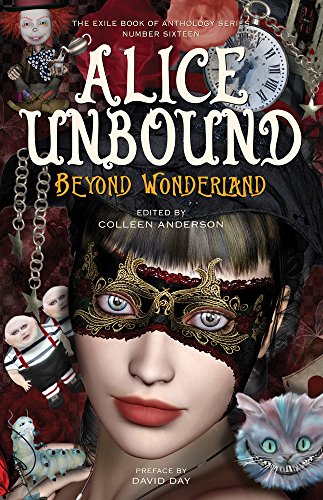 This tremendously entertaining anthology edited by author and poet Anderson pays homage to Lewis Carroll’s Alice’s Adventures in Wonderland while shepherding Carroll’s ideas to brave new territories. David Day notes in his preface, “Each [generation] must attempt to understand what Alice and Wonderland might mean in the context of their world.” Characters such as Alice, the Cheshire Cat, and the Jabberwock are reimagined through modern themes such as gender identification, populist politics, and climate change. Lisa Smedman’s “We Are All Mad Here” posits Wonderland as the mental escape of someone with PTSD. Dominik Parisien’s “The River Street Witch” and Linda DeMeulemeester’s “The Rise of the Crimson Queen” throw traumatized children into Wonderland’s pool of tears to sink or swim. Robert Dawson introduces the Mock Turtle and the Gryphon to a futuristic dystopia in “Soup of the Evening.” And “evil’s the root of all money” as fake news becomes a virus in Pat Flewwelling’s “Cyphoid Mary.” There is some joy here, but a bleak undercurrent runs through many stories, mirroring Day’s comment that with Trump as a “modern-day Mad Hatter,” the world is one “in which lies have no consequence, which means that truth has no consequence, which means that irreality is reality.” This anthology will delight both lovers of Carroll’s works and fans of inventive genre fiction. (May)

Update: Due to a production error, this review was originally published without a star.