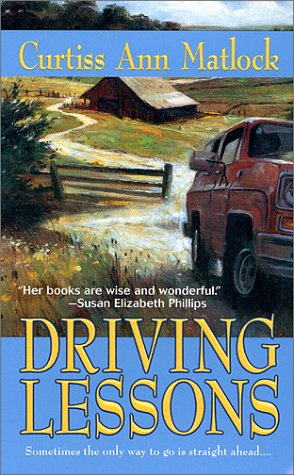 After 21 years of marriage, Charlene Darnell's husband abandons her and their three children. Traumatized, the Oklahoma mother takes to her bed and loses herself in episodes of Father Knows Best. She finds that her life has taken the wrong path, but she realizes she can't go back, only forward, especially when there are bills to pay and kids to feed. Like a new driver behind the wheel, Charlene carefully maneuvers around her troubles: her husband has moved in with another woman, her 18-year-old son won't talk to his father, her other teenager develops violent tendencies, her baby daughter starts having nightmares, her sister is going through a delicate pregnancy and her father's health turns fragile. Help comes from an unexpected source. Mason MacCoy has been in love with Charlene for 10 years. Now that she is free he approaches her. She is leery of starting a new relationship, but with Mason's patience and emotional support, Charlene finally takes control of her life: she gets a job and files for divorce.. With her realistic characters and absorbing dialogue, Matlock crafts a moving story about a woman's road to self-discovery. (Aug.) FUGITIVE'S TRAIL Robert J. Conley. St. Martin's, $5.99 (272p) ISBN 0-312-97508-2 ~ Conley's newest Western may skimp on historical context, but it compensates with wit and a plot that bounces from one trouble-brewing scene to the next. Scrawny young Marvin Parmlee, an only child, comes from a family who couldn't care less about him. His best friend is his dog, comically named Farty after one of the canine's disgusting habits. When outlaw Joe Pigg takes offense to the scraggly mutt, he shoots the dog dead. The boy, thrown into a blind rage, beats Pigg to death with an axe handle, marking the first of at least 15 killings. Kid Parmlee, as he comes to be known, then leaves Texas and lives the life of a fugitive, hooking up with a succession of riding partners, employers, outlaws and whores. While on the trail, Parmlee becomes both the hunter and the hunted as his killings and subsequent enemies mount. The touching conclusion, however, finally brings Parmlee off the trail. Conley (The Actor), winner of a Silver Spur Award, tellsl this story through the voice of uneducated, uninhibited Kid Parmlee, and his simple yet charming prose (full of misspellings, phonetic spellings and slang) takes a little getting used to. (Aug.)
close
Details