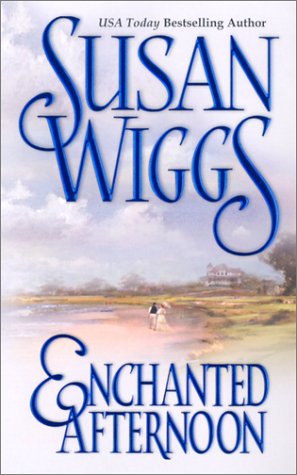 Spousal abuse, illiteracy and disputed paternity are only a few of the contemporary issues that figure in this late 19th-century romance. When last seen in Wiggs's , the scientific-minded Michael Rowan had broken off his relationship with hotheaded Helena Cabot, a society belle from an important family. Upon discovering she was pregnant, Helena accepted a marriage proposal from up-and-coming politician Troy Barnes. As this book opens, nine years have passed, Troy has discovered the deception right after the death of Helena's father and he has begun beating her. As readers will expect from one of Wiggs' resourceful heroines, Helena breaks from him and sets out on her own with her eight-year-old son. Her first impulse is to turn to Michael but, unaware that she's being abused and certain that his long-held secrets would repel her, he demurs. So she leases the rundown Moon Lake Lodge in Saratoga Springs, N.Y., and proceeds to create a haven for other women in trouble. One of them helps Helena overcome her inability to read while Michael bonds with his newly discovered son. Wiggs has a knack for creating engaging characters, and her energetic prose shines through the pages. However, the romance between Helena and Michael is curiously tepid compared to their earlier sparks. Although it's not vintage Wiggs, her latest should please her fans, and to a lesser extent, readers new to her work.