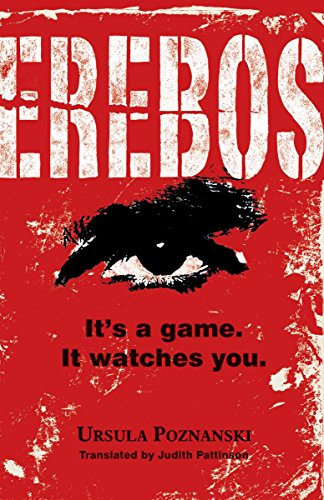 The lines between reality and fantasy blur in this stunning thriller, originally published in Germany. In London, a new computer game is making the rounds. Called Erebos, it's deceptively immersive, insidiously addictive, and so complex that it might even be alive. It insists on absolute secrecy and discretion from its players, rewards and punishes in strange ways, and recruits through word-of-mouth. When Nick Dunmore begins playing, he's quickly sucked in, learning the bizarre rules and advancing rapidly. However, he's forced to question his dedication after the game starts to exert its influence on the real world, asking him to perform "missions" with potentially hazardous consequences. When he and several other players investigate who or what is behind Erebos, they unravel a surprisingly personal vendetta at the heart of the game, driving players toward its ultimate, violent purpose. As the narrative moves fluidly between the real world and the game, Poznanski plays with expectations and perception, incorporating SF, mystery, and ghost story elements, along with solid characterizations. The result is a prescient page-turner and a provocative, believable portrayal of the seductive world of virtual gaming. Ages 12–up. Agent: AVA International. (Mar.)
close
Details