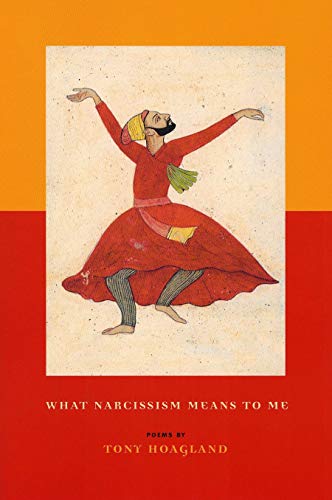 WHAT NARCISSISM MEANS TO ME

"How did I come to believe in a government called Tony Hoagland?/ with an economy based on flattery and self-protection?" How indeed. In Hoagland's third collection, as in the previous two, his speaker devotes considerable energy to unmasking this vulnerable self, revealing its ugliness, hatred and social sensitivity in articulate detail. A typical poem begins masochistically: " 'Success is the worst possible thing that could happen / to a man like you,' she said, / 'because the shiny shoes, and flattery / and the self-/ lubricating slime of affluence would mean / you'd never have to face your failure as a human being.' "—and then goes on to concede, perhaps predictably, that "anyway, she was right about me...." In milder poems, which often revolve around eating dinner, drinking wine and hanging out with friends (typically other creative writing professors), he explores a more social self, slipping into a "he said, she said" mode, and reporting at great length on friends' witticisms: "Kath says February is always like eating a raw egg;/ Peter says it's like wearing a bandage on your head; / Mary says it's like a pack of wild dogs who have gotten into medical waste,/ and smiles because she clearly is the winner." Hoagland funnels 21st-century corporate detritus into his more Whitmanesque impulses, in which he begins to explore a sweeping and explicitly American identity oriented by Radio Shacks and K marts. His attempts to branch out with satires of anthropological reportage, particularly about black people, can be somewhat embarrassing: "Black for me is a country/ more foreign than China or Vagina,/ more alarming than going down Niagara on Viagra...." Readers will probably prefer the poems about sitting alone in a room or drinking wine with Dean Young.