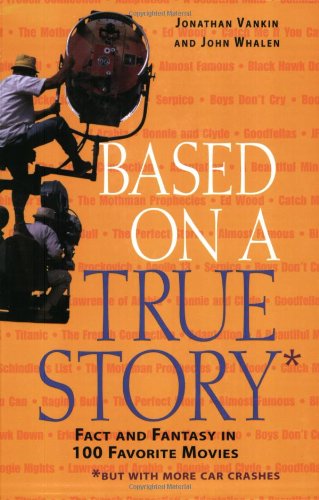 BASED ON A TRUE STORY*: Fact and Fantasy in 100 Favorite Movies *But with More Car Crashes

Films that purportedly document real-life events have a special allure for moviegoers, posit journalists Vankin and Whalen, which is why the phrase "based on a true story" is so prevalent in movie promos. But the term is loose and poorly defined, and in this highly entertaining dissection, the authors examine 100 films, detailing what about them is really true and what's simply a story. Wittily working their way through most of the well-known "true" films of the last four decades— , , , , , etc.—Vankin and Whalen categorize movies by type (e.g., crime thrillers, war movies, sports films). Sometimes, what's on the screen diverges wildly from known history, as in the case of , and Vankin and Whalen may be overwhelmed by the differences between truth and fiction. Less often, a film really does provide a mirror, like , which left only more subtle details of Loretta Lynn's life for the authors to explore. Most of the movies, though, fall between the extremes, including enough fact to warrant the "based on a true story" tag, but not accurate enough to be completely true. Not surprisingly, readers who've actually seen these films stand to get the most out of Vankin and Whalen's often picky but always jaunty analyses. 110 b&w photos.