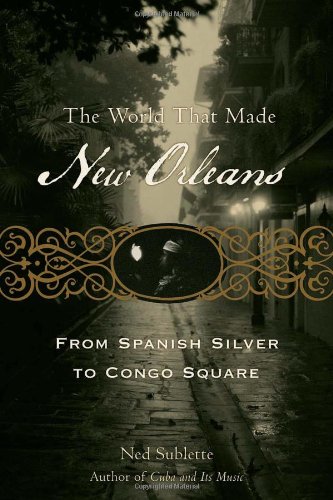 The World That Made New Orleans: From Spanish Silver to Congo Square

In this thoughtful, well-researched history, Sublette ( ) charts the development of New Orleans, from European colonization through the Haitian revolution (which was crucial to French and American negotiations over Louisiana) to the Louisiana Purchase. Central to his account are the African slaves, who began arriving in New Orleans in 1719, and their contributions to the city’s musical life. He considers, for example, how musical influences from different parts of Africa—Kongo drumming and Senegambian banjo playing—combined to forge a distinctive musical culture. Sublette also lucidly discusses New Orleans’ important role in the domestic slave trade, arguing persuasively that the culture of slavery in New Orleans was different from that in Virginia or South Carolina. In New Orleans, there was a large population of free blacks, and slaves there had “greater relative freedom” than elsewhere. Furthermore, by the early 19th century, Louisiana was home to more African-born slaves than the Upper South. Those factors, which helped perpetuate African religion and dance, combined to offer “an alternative path of development for African American culture.” As our nation continues to ponder the future of the Big Easy, Sublette offers an informative accounting of that great city’s past. 20 b&w photos.