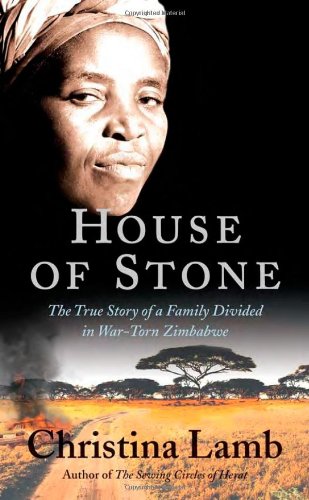 House of Stone: The True Story of a Family Divided in War-Torn Zimbabwe

Two very different lives run in parallel in award-winning British journalist Lamb’s riveting account of Zimbabwe’s brutal civil war in the 1970s, “the elation of becoming the last British colony in Africa to win independence [in 1980]... and then the descent into madness.” By alternating chapters from the perspectives of Aqui Shamvi, a poor black woman, and Nigel Hough, a wealthy white man, Lamb ( ) brings both the personal and the political home to the reader. Her level tone and everyday language make the dramatic story all the more compelling. Though Aqui and Nigel are linked for a few years by her employment as his children’s nanny, their lives mostly move along very separate paths as black Africans are dispossessed by the colonialist Land Acts, urban black quarters are demolished under President Robert Mugabe’s orders and violent squatters occupy white-owned land. Lamb’s indictment of Mugabe and his African enforcers and European enablers is complete; however, she achieves remarkable balance and demonstrates an extraordinary capacity to take the reader into the racism- and colonialism-torn worlds of two decent people, neither at home in their native land.