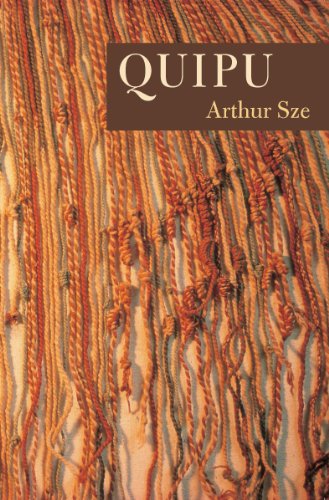 Quipu are knotted cords used for record-keeping in Inca civilization, and, Sze reminds us, by the ancient Chinese. As in earlier work, Sze ( ) weaves together details from nature (especially from New Mexico, where he lives), questions from philosophy, and discoveries from modern physics, collecting facts with a Thoreau-like patience. To the hints of Taoism some readers have found in his previous work, Sze adds a focus on domestic life and erotic love. Liminal encounters between people and animals, lovers and strangers, even rocks, fish and sky, create a poetry of simultaneity, and a contemplative mindset: "A moment in the body," he writes, "is beauty's memento mori: when I rake gravel in/ a courtyard, or sweep apricot leaves off a deck,/ I know an inexorable inflorescence." Sometimes Sze has trouble putting his details together, letting the poems and sequences go on too long, or degenerate into mere lists. As in the verse of Charles Wright, however, powers of observation give the best poems and sequences undeniable energies, whether considering a bowl, a candle or a tile in Sze's own living room, or else watching as "a broad-tailed hummingbird whirs in the air—/ and in a dewdrop on a mimosa leaf/ is the day's angular momentum."