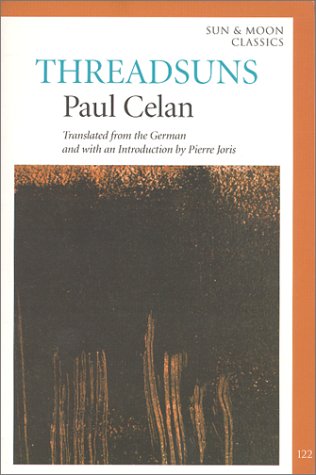 Though fluent in a number of languages, Celan (1920-1970), who had come to Paris from Romanian Bukovina, pointedly wrote in German after WWII. His decomposition and recasting of that language, through a style that can seem dizzying in its complex poly-referentiality, was compounded by his erudition, by his own history as a Holocaust survivor whose parents were murdered in the camps, and finally by his suicide. For many, he one of the major poets of the 20th century. Though Celan's work presents obvious difficulties for any translator, his English-language readers have long been well-served by Michael Hamburger's starkly graceful selected translations (Poems of Paul Celan, Persea), which remain the best available, and more recently, by Pierre Joris's acute renderings of Celan's later work. Of the new collections here, the volume from Celan biographer and critic Felstiner is easily the most comprehensive, containing ample cullings from all of Celan's books, including many poems not included in Hamburger's selection, along with previously untranslated early and late work and four prose pieces. Felstiner handles these translations competently, rendering Celan in a somewhat more colloquial style than Hamburger or Joris. But his shifting diction (including ""Thou"") and his tendency to capitalize nouns and to let German words stand untranslated in the English text can make for a distracting admixture, as it does in Celan's much-anthologized early work, ""Deathfugue"": ""Black milk of daybreak we drink you at night/ we drink you at midday Death is a master aus Deutschland."" On the whole, Felstiner's efforts often pale beside those of Hamburger and Joris, but the page count of this dual-language collection will make it the default choice of those who will buy only one Celan volume. Popov and McHugh's collection also ranges over Celan's oeuvre, but far less comprehensively or successfully. Unlike Felstiner and Joris, Popov (The Russian People Speak: Democracy at the Crossroads) and poet McHugh (Father of the Predicaments, etc.) don't present the German texts en face, a practice they regard, in their preface, as a potential distraction from the reader's experience of their renderings. It would indeed be a distraction, making painfully clear just how far they depart from the originals to arrive at their idiosyncratic versions, which alter Celan's precise line and stanza lengths significantly, and forsake Celan's vertiginous difficulties for a more simplistic--sometimes macabre or witty--style that's littered with heavy-handed gestures. One poem, for example, contains an ex nihilo insertion gleefully riffing on a German pun, others tip the scales of Celan's carefully weighted pronouns into one viewpoint or another. Even when hewing closer to the source text, Popov and McHugh incessantly heighten the poems' language, degrading their thorniness with more traditional sentiments. Fortunately, many of the poems translated by Popov and McHugh can be found in Joris's new volume, or in his 1995 rendering of Celan's Breathturn, both of which present entire books in razor-sharp, finely nuanced translations. Threadsuns represents the continuation of a marked turn in Celan's poetics--away from lusher effusions to intensely compressed, increasingly stark investigations of language, history and the poet's own capacities. Because much of this later work is serial in nature, Joris's decision to render the books in their entirety is profoundly important, and helps to make them necessary complements to Hamburger's selections. While it may not consistently attain the dazzling heights and depths of Celan's finest work in Breathturn and 1963's The No-One's Rose, Threadsuns contains an abundance of brilliant poems and provides ample evidence for the magnitude of Celan's stature in the last century, and in the one to come. (Nov.)
close
Details