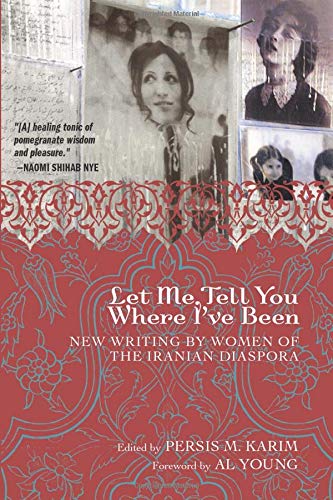 Let Me Tell You Where I've Been: New Writing by Women of the Iranian Diaspora

The diversity of voices represented in this stunning collection of poetry, fiction and nonfiction by women of Iranian descent shatters their narrow image in the U.S. Though none are well known, most of the 53 authors live in the U.S. and 15 have been published in journals if not books. One writes about a woman's relationship with her chador. Another remembers her desire, as a young girl, to distance herself from the "old-world values" espoused by her parents. A woman who sought refuge in Germany conveys the longing she felt to return to her birthplace by detailing a market scene and how the taste of raw walnuts made her feel at home again. Like other émigrés, the women who fled Iran after the 1979 revolution have continued to feel strong ties with their homeland. Many of those now living in the U.S., Canada or the U.K. have grappled with such feelings in an era when cars in the U.S. were emblazoned with bumper stickers reading "Iranians Go Home" and "We Play Cowboys and Iranians." Though many contributions avoid politics, several writers illustrate heartbreaking incidents of stereotyping that reveal the struggle of facing pervasive social suspicion. Touching on universal themes of love and loss, exile and longing, politics and war, this collection derives its cumulative power from its authors' subtle, uniquely female perceptions.