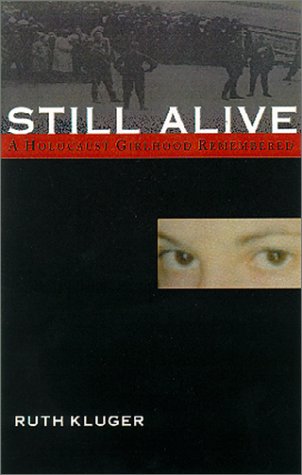 In the 1950s, when Kluger's children were small and growing up in the U.S., she caught German measles from them. Her family doctor said, "You must have led a sheltered childhood." In reality, she spent her early years in Theresienstadt and Birkenau-Auschwitz. Kluger's memoir—which has already become a bestseller in Germany—is a startling, clear-eyed and unflinching examination of growing up as a Jewish girl during the Holocaust. Calmly, and chillingly, relating the everyday events of her youth—Aryan students making colored paper swastikas and then asking Jewish students to judge them, breaking the law to go to an Aryan movie house to see Disney's and being challenged by a neighbor—Kluger charts how she and her family moved from a middle-class Viennese life to dealing with the constant threat of death in the camps. Kluger's style is wry ("the muse of history has a way of cracking bad jokes at the expense of the Jews"), and she can shock readers with simple, honest admissions, such as her embarrassment, in the 1970s, when her mother asks unanswerable questions of a speaker about the death camps. Kluger, who is now professor emerita at UC-Irvine and has won awards for this memoir as well as her literary criticism, has written a deeply moving and significant work that raises vital questions about cultural representations of the Holocaust (why did the highly praised, socially conscious 1947 film never mention "the Jewish catastrophe"?) and searches for what it means to be a survivor. Already compared by European critics to the work of Primo Levi and Elie Wiesel, this is an important addition to Jewish, Holocaust and women's studies.