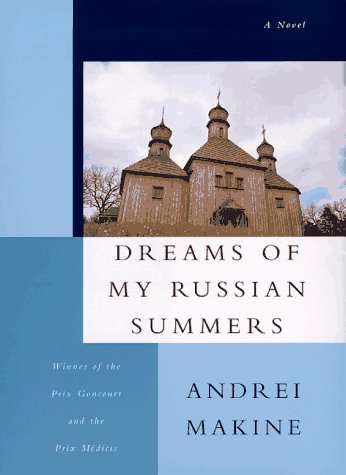 Dreams of My Russian Summers

A portrait of private heroism enlivens the familiar triad of memory, literature and exile in this haunting autobiographical novel, which, on its appearance in France, became the first work to win both of the country's highest literary honors, the Prix Medicis and the Prix de Goncourt. As the unnamed Russian narrator sits on the balcony of his French-born grandmother's house overlooking the Siberian steppe, she tells him stories of the world on the other side of the iron curtain: of Proust's luxurious watering holes; of a 10,000-franc Parisian feast comprised of 100 frogs; of Felix Faure, president of the Republic, ""who died in the arms of his mistress""--a public tragedy of eros and politics inconceivable in the land of Stalin, Khruschev and Brezhnev. She tells him also about the life of intense hardship that began for her when she moved from Paris to Russia, working bravely as a nurse while the catastrophic history of 20th-century Russia exploded all around her, separated her from her husband and eventually led to her arbitrary banishment to Siberia. Obsessed with these tales, the narrator finds himself, in adolescence, a stranger in his own land. Years later, drawn irresistably to Paris, sleeping penniless and ill among the graves of his ancestors, the narrator finds himself severed from his grandmother by the French bureacracy and must draw, from her memory, the courage to face an exile even more profound than the one he left behind. Through the gemlike anecdotes shared by grandmother and grandson, Makine develops a persuasive theory of art, showing how stories cross boundaries of language, class and nationality to take over a life: ""Literature,'' the narrator realizes, ""was now revealed as being perpetual amazement at the flow of words into which the world dissolved.'' Makine (who lives in France and writes in French) recalls those Russian masters who made French their father tongue, and he recalls them all the more poignantly in an age when cosmopolitanism seems on the defensive in much of Europe. The living symbol of a suffering, divided Europe, the character of the grandmother--whose good, courageous spirit triumphs over the atrocities of war and the police state--makes this latest installment in the great European tradition also one of the toughest and, ultimately, one of the most hopeful. (July)
close
Details