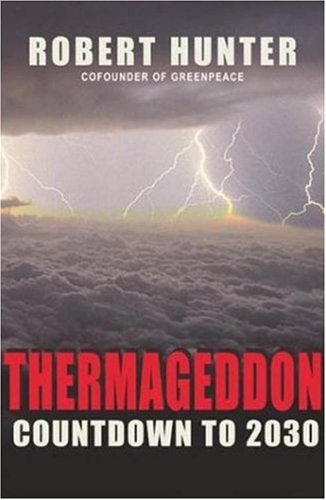 Acting in the role of elder eco-statesman, Greenpeace cofounder Hunter provides a rhetorical linkage for what are the standard theories of global warming for a popular science readership, although there is no doubt which side of the political line of recent long-term scientific studies he is working. Hunter underlines in harsh, dark strokes the well-debated points of global warming and comes to an even darker conclusion: the stable global weather system of the last 10,000 years will "tip" under the weight of the greenhouse effect, inducing a worldwide "temperature Götterdämmerung" or "radiative forcing." The short version: the Arctic ice cap will nearly disappear during one summer within the next 30 years; then, on accepted geophysical principles around the radiation effect, what follows must be massive one-way dislocations of climate: heat surges, desertification, floods and other large-scale shifts in local geography. In the face of his own terrifying argument, Hunter seems to withdraw to a distant Zen-like plane—he presents this stark news, surprisingly, with less stridency than in his earlier books (, etc.). Only episodic flourishes against "the Carbon Club lobbyists," what he sees as the Bush administration's prevarications on the Kyoto treaties—and, of course, his personal stance on the use of fossil fuels in everyday life—will remind readers that this is a founding Greenpeace activist. Even those sparks are insulated by Hunter's grandfatherly advice: all his arguments leading to climate endgame periodically loop through a first-person voice "apologia" to his young grandson Dexter, who will be an adult by the time "thermageddon" is upon us. The effect is that Hunter's argument, while well crafted and even well balanced ecologically, seems deflated compared to other recent books on global warming.