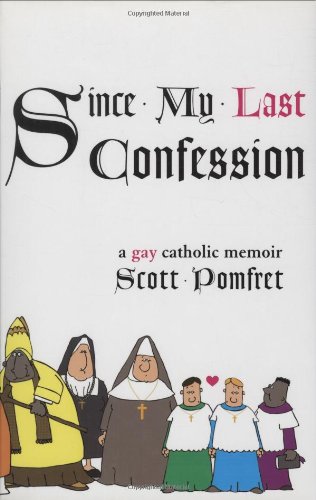 Since My Last Confession: A Gay Catholic Memoir

Pomfret ( ) recounts the apparently irresolvable contradictions in his life: as an erotica-writing, gay Catholic lector with an atheist boyfriend, he has ample material, and his lighthearted memoir interweaves the Catechism, “Franciscan Fashions,” “Handy Gay Vocabulary,” humorous asides on how to stalk an archbishop and historical tidbits about martyred believers and gay clergy. The book's best sections detail Pomfret's crisis of faith ignited by the church's child sex-abuse scandals and opposition to same-sex marriage—but they lie buried beneath a morass of irrelevant digressions, stale stereotyping, implausible dialogue and caricatures that are more callous than comedic (Pomfret compares a disabled congregant to Chewbacca). The author elucidates the eventual resolution of his spiritual crises with considerable integrity and manages to present sympathetic portraits of clergy, biting satires of church practices (the worship of Jesus' foreskin, condemnation of Harry Potter) and a nuanced rendering of a church and congregation considering its role in a changing world. Although unfailingly lively, the book suffers from a lack of focus and a dizzying dependence on “fun facts” rather than engaged analysis, which ultimately will leave readers unsatisfied.