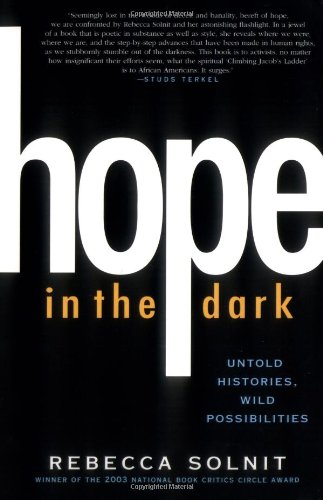 This slim volume, to quote the author's own reflections on the quincentennial of Columbus's discovery of America, is "a zigzag trail of encounters, reactions, and realizations." Solnit, recent winner of an NBCC award for criticism for rambles from place to place and topic to topic in a discursive examination of the current state of leftist protest and activism. Unwilling to accept the bleak, almost apocalyptic worldview of many of her progressive counterparts, Solnit celebrates the hope and optimism that recent episodes reveal. She points to the resurrection of indigenous causes represented by Zapatismo, the WTO protests in Seattle and Cancun and the worldwide protests against the U.S.-led war in Iraq, and other smaller, more marginal protests. Solnit argues persuasively that engaged, thoughtful dissent is far healthier today than many believe. Activists, who operate by nature on the fringes of hierarchies of economy and power, often fail to recognize the power of activity that seems inconsequential. Her goal, in essence, is "to throw out the crippling assumptions with which many activists proceed." While Solnit's goal is admirable and her prose graceful, this book suffers from the same confusion and disorganization she recognizes as necessarily inherent to activism itself. Her examples are diverse yet disjointed; she is overly reliant on the words of others; and she often wanders into spiritual mumbo-jumbo and platitudes. While these tendencies hamper the clarity of her argument, fans of Solnit and progressives may find much to admire here.