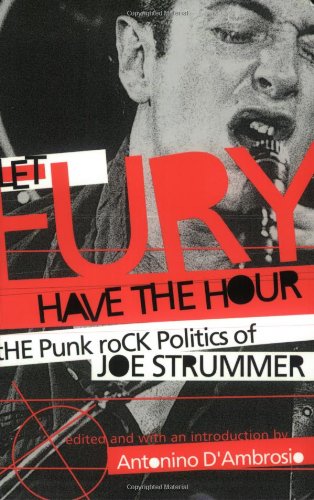 LET FURY HAVE THE HOUR: The Punk Rock Politics of Joe Strummer

"Were it not for the Clash, punk would have been just a sneer, a safety pin, and a pair of bondage trousers," writes Billy Bragg, and documentarian/activist D'Ambrosio proves it with this gathering of skillfully selected articles and essays on Clash front man Joe Strummer (1952–2002), from the likes of Lester Bangs, Chuck D, Greil Marcus and D'Ambrosio himself. Most contributions consider the highly politicized early years of "the only band that mattered," its commercial U.S. breakthrough in 1983 as well as its imminent demise, and Strummer's role as lyricist and political agitator. Although a few essays discuss the political ambiguity of some of Strummer's songs, they mostly praise the outspoken singer/guitarist's commitment to confronting racism, classism and capitalism at a time when punk bands were apolitical or nihilistic. In a 1979 essay, Lester Bangs credits the Clash with forging "the missing link between black music and white noise." Other pieces chronicle Strummer's stints as a film score composer and actor and his ongoing forays into multicultural music. Some essays lean toward a preachy interpretation of Strummer's humanist philosophy, but the best invoke irresistible excitement as they describe beer-soaked early Clash shows and the message of hope the band gave to kids rebelling against what they saw as the oppressive conservatism and systemic self-loathing of Thatcherite England.