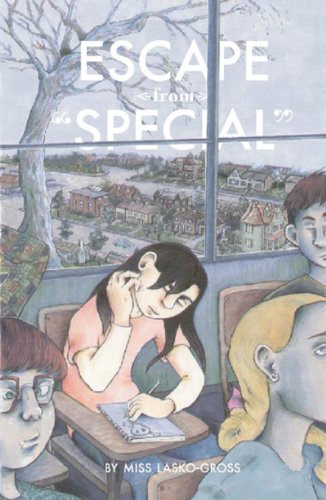 Like many people, Lasko-Gross's protagonist, Melissa, has had a difficult girlhood; like an increasing number of people, her creator has drawn short, anecdotal, "semi-autobiographical" sketches as a first graphic novel. In a series of brief stories that capture the heightened emotional pitch of adolescence, Melissa grows up in a family of hippies who briefly send her to a experimental education school. She goes out on the road with a band her father's working with; she visits her racist grandfather; she's sent to a child psychologist and very quickly learns not only how to outsmart him but how to use psychological tactics with people who bully her. Having worked her way up from being ostracized because she's in the "special studies" group to being ostracized because she's in her middle school class's highest reading group, she concludes that " 'special' is just a nice way of saying retarded or stupid or weird." Lasko-Gross's artwork is a delicately shaded refinement of the caricatures young Melissa draws to mock her rivals. Her knack for odd, distorted anatomy that neatly conveys facial expressions and body language owes something to Lynda Barry, as does her half-cutting, half-sympathetic attitude toward characters obsessed with the pecking order in middle-school cliques.