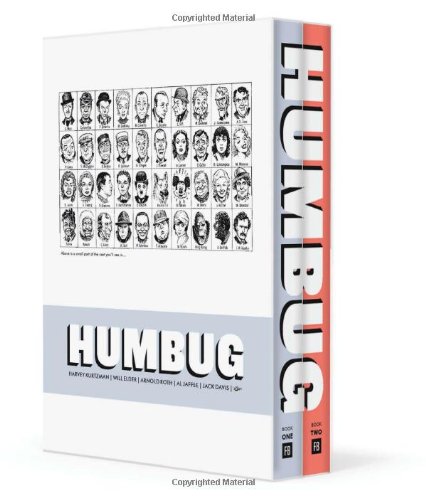 ’s early years have been justly lauded for their japing assault on postwar American culture, but this outstanding two-volume boxed set reflects the history of comedy in the period after staff stars like Kurtzman jumped ship in 1956. , whose mere 11 monthly issues published in 1957 and 1958 are all collected here, was a refreshing if little-noticed seat-of-the-pants hybrid of -style buffoonery and a tony wit that sadly never found its place. Read today, seems a time capsule from when comedy was entering its drier, postvaudevillian period; comedians still wore ties and were expected to if not attend college at least have read a book or two. The magazine’s mix of chaos and control—Kurtzman’s Cecil B. DeMille–sized comedic crowd scenes set against Larry Siegel’s pitch-perfect literary satires—creates an uneasy balance that almost necessitated a short shelf life, much in the same manner as (which years later briefly picked up the mantle that threw down). The set might not be best for end-to-end reading (11 issues is a heavy dose, with all those and references) but for dry cocktail laughs and low schoolboy snorts, it’s hard to think of a better pair of books to have at your nightstand.