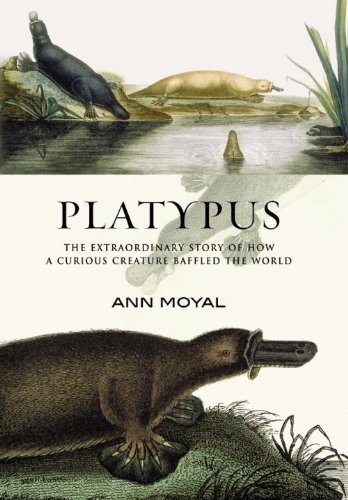 PLATYPUS: The Extraordinary Story of How a Curious Creature Baffled the World

Everyone knows the platypus looks bizarre: its duck's beak, webbed feet, fur, swimming skills, secretive lifestyle and egg-laying talents combine to make the Australian mammal an object of fascination for would-be observers around the globe. Yet few of the monotreme's admirers have seen one in the wild; fewer still know the key roles platypuses have played in theories of evolution and in European concepts of Aussie life. Moyal—a historian of science based in Canberra, Australia—sets out to tell us all this and more in a cleanly written tome combining scientific curiosities with narrative history. Naturalists from Napoleonic France visited New Holland (Australia) in 1801, carrying wombats, emus and a platypus back to Paris, where astonished Europeans had trouble believing their eyes. Early 19th-century thinkers tried to arrange all the creatures they knew into a "Chain of Being," reflecting divine creation. The egg-laying, warm-blooded platypus and echidna (and their distant cousins, the marsupials) confounded all existing models, and hence sparked intense debate: did these critters really lay eggs? A "scattered company of amateur naturalists" tried hard for answers: the intrepid George Bennett, and later his son, found them, with consequences for the future of biology. Moyal's accessible account integrates this story with others: how was European racism bad for the duck-billed mammal? Who learned how to keep a captive platypus alive? And why, in the midst of World War II, did Australians take great pains to send a live one to Winston Churchill? Readers who care about Darwin and his successors, and readers who simply dig exotic animals, should enjoy Moyal's work: folks who belong in both categories won't be able to put it down.