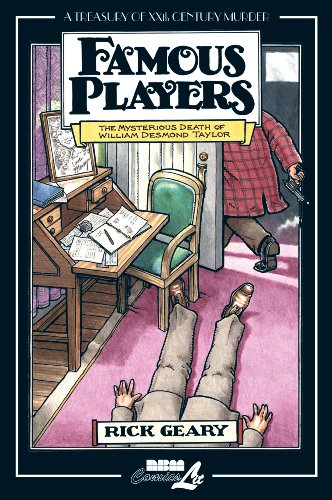 The 10th in Geary's ongoing, multi–Eisner-nominated historical murder series, tells the story of one of the first major Hollywood scandals. Silent film actor/director William Desmond Taylor was killed in his home in February 1922, not long after popular actor Fatty Arbuckle was also accused of murder. Geary presents the facts of the case in a series of historical chapters, offering up bungled investigative tactics, dead-end leads and a colorful cast of characters, all for the reader to analyze. His quirky b&w ink drawings are full of expression, recalling the melodrama of silent films and giving life to such characters as actresses Mary Miles Minter and Mabel Normand and other early film business insiders. The narrative presents this murder, along with the Arbuckle case, as the beginning of Hollywood's lurid history, which he evokes with a series of plates depicting actors whose tragic deaths are noted beneath. By including not only the Black Dahlia but Natalie Wood, River Phoenix and Phil Hartman, he drives home the point that Hollywood has never escaped its dark past.