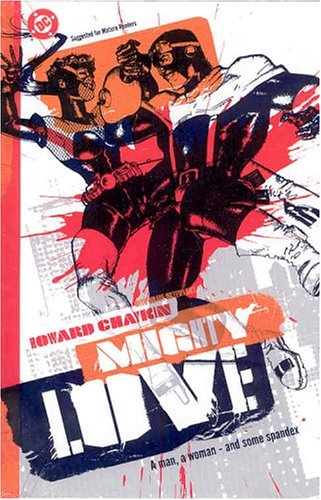 Mighty Love: A Man, a Woman—and Some Spandex

All of veteran cartoonist Chaykin's comics, from to , have been marked by crisp graphic inventiveness, a touch of sexual perversity, snappy dialogue, the look of 1940s film noir and a hero who looks a bit like the cartoonist himself. In a way, Chaykin is as reliable as Woody Allen. This work, then, is his : a slight but enjoyable, opposites-attract romance in the trappings of another genre—in this case, a superhero adventure. He's a defense lawyer who moonlights as a scum-bashing hero called the Iron Angel; she's a tough-as-nails cop who moonlights as a police-corruption-fighting heroine called Skylark. Readers don't need a Ph.D. to tell that the story's going to center on the romantic tension between these two characters, and Chaykin pushes the idea that their lives are exactly parallel a little too hard. Accept this work as a genre exercise, though (of course the charismatic fund-raiser turns out to be a bad guy; of course the heroes squabble while staring straight into one another's eyes), and its charms become much more apparent. Chaykin's still a remarkable, quirky artist, fascinated by patterns in fabric and in buildings, detailing carefully rendered facial expressions with sharp, zigzagging lines. And his heroes have the kind of William Powell and Myrna Loy chemistry that demands a sequel.