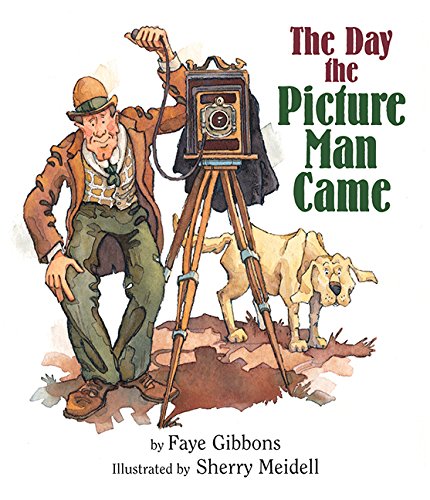 THE DAY THE PICTURE MAN CAME

Gibbons and Meidell () team up again to produce a rollicking tale of a turn-of-the-20th-century Georgia mountain family visited by a traveling photographer. The photographer's arrival cheers Emily, the narrator, who's feeling frazzled amid the clamor of a five-sibling household ("Then my younger brother Wally's dogs chased my baby sister Jessie's cat through the house and spilled my jar of guaranteed freckle remover all over Papa's almanac"). When the family decides to sit for a portrait—dogs, cat and goat included—the stage is set for an entertaining ruckus. Meidell's watercolors whir with motion, from the energetic barefoot children in their Sunday best to the wild-eyed family pets as they madly pursue one another (except for the goat, Pete, who faints "when he gets scared"). Whatever difficulty readers may have in keeping the names of animals and children straight won't distract much from the comedy that is relayed through the fast-paced, dialect-peppered text and the playful illustrations. Meidell's use of multiple shades of the same color adds texture and depth, while pleasingly containing the chaos. Two sepia-toned "photos" of the mayhem-cursed menagerie serve as a fitting conclusion. Ages 5-up.