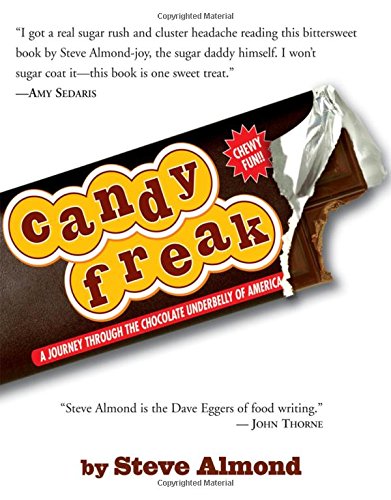 CANDYFREAK: A Journey Through the Chocolate Underbelly of America

The appropriately named Almond goes beyond candy obsession to enter the realm of "freakdom." Right up front, he divulges that he has eaten a piece of candy "every single day of his entire life," "thinks about candy at least once an hour" and "has between three and seven pounds of candy in his house at all times." Indeed, Almond's fascination is no mere hobby—it's taken over his life. And what's a Boston College creative writing teacher to do when he can't get M&Ms, Clark Bars and Bottle Caps off his mind? Write a book on candy, of course. Almond's tribute falls somewhere between Hilary Liftin's decidedly personal and Tim Richardson's almost scholarly . There are enough anecdotes from Almond's lifelong fixation that readers will feel as if they know him (about halfway through the book, when Almond is visiting a factory and a marketing director offers him a taste of a coconut treat, readers will know why he tells her, "I'm really kind of full"—he hates coconut). But there are also enough facts to draw readers' attention away from the unnaturally fanatical Almond and onto the subject at hand. Almond isn't interested in "The Big Three" (Nestlé, Hershey's and Mars). Instead, he checks out "the little guys," visiting the roasters at Goldenberg's Peanut Chews headquarters and hanging out with a "chocolate engineer" at a gourmet chocolate lab in Vermont. Almond's awareness of how strange he is—the man actually buys "seconds" of certain candies and refers to the popular chocolate mint parfait as "the Andes oeuvre"—is strangely endearing.