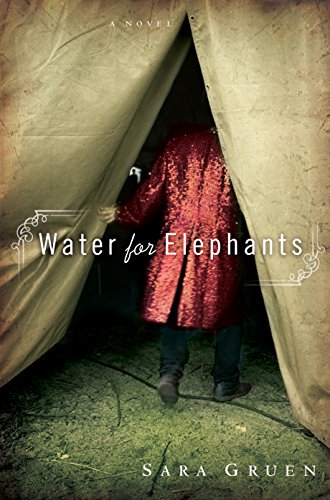 With its spotlight on elephants, Gruen's romantic page-turner hinges on the human-animal bonds that drove her debut and its sequel ( and )—but without the mass appeal that horses hold. The novel, told in flashback by nonagenarian Jacob Jankowski, recounts the wild and wonderful period he spent with the Benzini Brothers Most Spectacular Show on Earth, a traveling circus he joined during the Great Depression. When 23-year-old Jankowski learns that his parents have been killed in a car crash, leaving him penniless, he drops out of Cornell veterinary school and parlays his expertise with animals into a job with the circus, where he cares for a menagerie of exotic creatures, including an elephant who only responds to Polish commands. He also falls in love with Marlena, one of the show's star performers—a romance complicated by Marlena's husband, the unbalanced, sadistic circus boss who beats both his wife and the animals Jankowski cares for. Despite her often clichéd prose and the predictability of the story's ending, Gruen skillfully humanizes the midgets, drunks, rubes and freaks who populate her book.