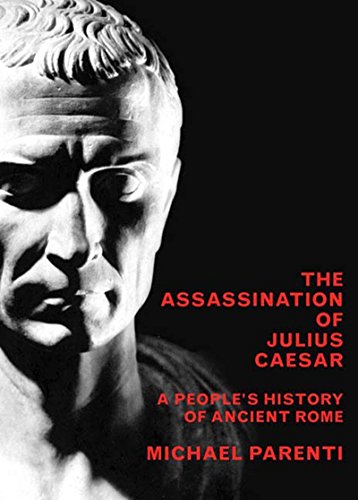 THE ASSASSINATION OF JULIUS CAESAR: A People's History of Ancient Rome

Why did a group of Roman senators gather near Pompey's theater on March 15, 44 B.C., to kill Julius Caesar? Was it their fear of Caesar's tyrannical power? Or were these aristocratic senators worried that Caesar's land reforms and leanings toward democracy would upset their own control over the Roman Republic? Parenti (, etc.) narrates a provocative history of the late republic in Rome (100–33 B.C.) to demonstrate that Caesar's death was the culmination of growing class conflict, economic disparity and political corruption. He reconstructs the history of these crucial years from the perspective of the Roman people, the masses of slaves, plebs and poor farmers who possessed no political power. Roughly 99% of the state's wealth was controlled by 1% of the population, according to Parenti. By the 60s B.C., the poor populace had begun to find spokesmen among such leaders as the tribunes Tiberius Gracchus and his younger brother, Gaius. Although the Gracchi attempted to introduce various reforms, they were eventually murdered, and the reform movements withered. Julius Caesar, says Parenti, took up where they left off, introducing laws to improve the condition of the poor, redistributing land and reducing unemployment. As Parenti points out, such efforts threatened the landed aristocracy's power in the Senate and resulted in Caesar's assassination. Parenti's method of telling history from the "bottom up" will be controversial, but he recreates the struggles of the late republic with such scintillating storytelling and deeply examined historical insight that his book provides an important alternative to the usual views of Caesar and the Roman Empire.