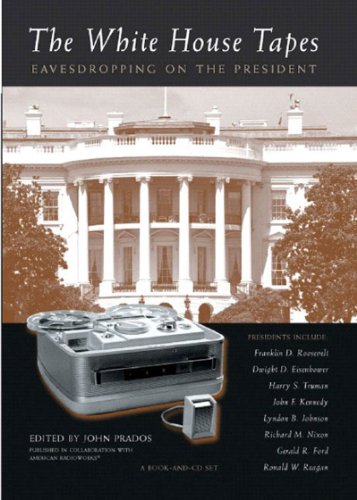 THE WHITE HOUSE TAPES: Eavesdropping on the President

Starting with FDR, just about all U.S. presidents have tape-recorded at least some Oval Office conversations. Currently, more than 4,600 hours of White House tapes are known to exist, 4,000 hours' worth recorded by Nixon. Of the total, approximately half the tapes have been declassified, and it is from these that Prados (a fellow of the National Security Archive and author of ) presents a sampling. The conversations appear on audio CDs (plus one disk with the American Radioworks program "White House Tapes: The President Calling"), while transcripts and Prados's useful historical prefaces to each conversation appear in the accompanying book. Not all the conversations are of historical moment. On the upside, we have FDR discussing civil rights with A. Philip Randolph and in a confidential huddle with Speaker of the House Sam Rayburn on the eve of WWII. Also worthwhile is JFK meeting with civil rights leaders like Martin Luther King and discussing the pros and cons of supporting a coup in South Vietnam with his National Security Council in October of 1963. Excerpts from Lyndon Johnson (touching on the Gulf of Tonkin and other major incidents) and Richard Nixon (including meetings with Billy Graham and H.R. Haldeman) are noteworthy as well. But Harry Truman's distracted phone calls concerning minor ambassadorial appointments seem superfluous, and Ronald Reagan's sections of the CDs and book feature only public remarks—nothing confidential, nothing from the inner sanctum of Reagan's Oval Office. In all, these selections leave one with the clear impression that not everything that happens in the Oval Office is worth eavesdropping on.