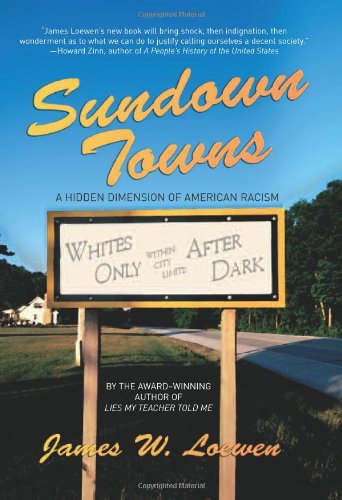 Sundown Towns: A Hidden Dimension of Segregation in America

According to bestselling sociologist Loewen ( ), "something significant has been left out of the broad history of race in America as it is usually taught," namely the establishment between 1890 and 1968 of thousands of "sundown towns" that systematically excluded African-Americans from living within their borders. Located mostly outside the traditional South, these towns employed legal formalities, race riots, policemen, bricks, fires and guns to produce homogeneously Caucasian communities—and some of them continue such unsavory practices to this day. Loewen's eye-opening history traces the sundown town's development and delineates the extent to which state governments and the federal government, "openly favor[ed] white supremacy" from the 1930s through the 1960s, "helped to create and maintain all-white communities" through their lending and insuring policies. "While African Americans never lost the right to vote in the North... they did lose the right to live in town after town, county after county," Loewen points out. The expulsion forced African-Americans into urban ghettoes and continues to have ramifications on the lives of whites, blacks and the social system at large. Admirably thorough and extensively footnoted, Loewen's investigation may put off some general readers with its density and statistical detail, but the stories he recounts form a compelling corrective to the "textbook archetype of interrupted progress." As the first comprehensive history of sundown towns ever written, this book is sure to become a landmark in several fields and a sure bet among Loewen's many fans.