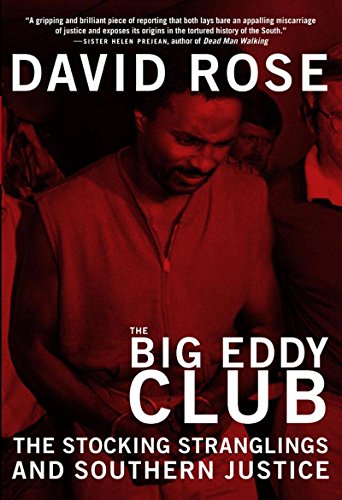 The Big Eddy Club: The Stocking Stranglings and Southern Justice

This ineptly titled tome is an engrossing blend of true crime, legal drama and acute exposé of racial antagonism. contributing editor Rose ( ) examines the brutal rape-murders of seven older white women in Columbus, Ga., in 1977–1978. In the mid-'80s, the police charged Carlton Gary, a charismatic black ladies' man with a long rap sheet; Gary was convicted and sentenced to die. Rose (who, controversially, agreed to turn over new findings to the defense in exchange for their cooperation) presents a riveting case that Gary, still on death row, may be innocent. Police and prosecutors, he contends, may have lied to the jury and withheld possibly exculpatory evidence from Gary's attorneys, whose defense of their indigent client was hamstrung by the judge's refusal to give them funds. Later, Gary's appeals were hobbled by procedural rules; the legal "technicalities" decried on cop shows, the author argues, more often railroad than protect defendants. Rose sets the story against Columbus's history of racial oppression and biased justice, comparing Gary's prosecution to the lynchings of yesteryear. The author harps unconvincingly on the "Southern rape complex" and insinuates more than he demonstrates about the role of Columbus's Big Eddy Club of white movers and shakers. Still, Rose presents a compelling indictment of justice gone awry. Photos.