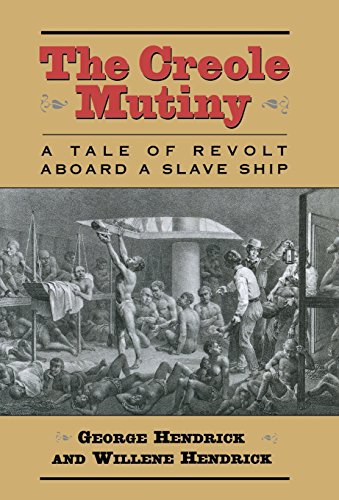 THE CREOLE MUTINY: A Tale of Revolt Aboard a Slave Ship

On the evening of November 7, 1841, 39 slaves on the brig , en route from Richmond, Va., to New Orleans, revolted and seized the ship from its white crew. The 39, "property" of a single owner, killed a guard and wounded the captain and two others. They forced the brig to be sailed into Nassau harbor in the Bahamas, where the British government, which had outlawed slavery in 1834, offered freedom to the slaves, perhaps 139 in all (most from other "owners"), on board. The British action touched off a wave of protest in America, but the British refused to back down. Eventually, the slave owners were reimbursed more than $110,000 by the Anglo-American Claims Commission. While the case is well-known to scholars, the Hendricks () return to primary source material, including the insurance claims made by the slaveholders, to reconstruct the mutiny. Of the 39 participants, the names of leader Madison Washington and 18 others are known, but their testimony either was not recorded or does not survive. In addition to detailing conditions on typical slave ships, the Hendricks include accounts of Madison Washington's earlier escape and recapture when he tried to rescue his wife, and ways in which Washington inspired Frederick Douglass and Lydia Maria Child, among others (shown among the 24 b&w illus.). The result is a concise account of a lesser-known but crucial moment in the history of slavery.