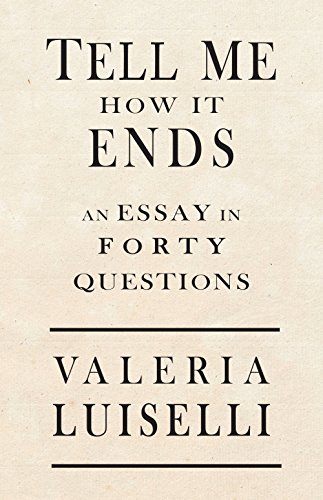 Tell Me How It Ends: An Essay in 40 Questions

From 2014 to 2015, Mexican writer Luiselli (The Story of My Teeth) volunteered as an interpreter with an immigration court in New York, where she administered a 40-question survey to unaccompanied and undocumented minors who fled Central America for the United States. She began this work during an unprecedented surge in the number of minors crossing the border. This book-length essay is a meditation on this crisis viewed through the lens of the survey questions, the most vital of which, “Why did you come to the United States?”, often determines the outcome of the child’s bid for citizenship: the more terrifying the circumstance, the better the chances. It is a distressingly Kafkaesque path to citizenship in which children are responsible for securing their own lawyers, and are often required to display physical injuries to prove themselves worthy of assistance. Luiselli explores the plights these children are fleeing—gang violence that can be traced to American anti-immigration policies, drug use, and arms trafficking—as well as their harrowing journeys, many riding atop Mexican freight trains (known as la Bestia, the Beast) to the border. In a coda, Luiselli highlights a student group at Hofstra University working to improve conditions for immigrants via educational and recreational programs. This is a vital document for understanding the crisis that immigrants to the U.S. are facing, and a call to action for those who find this situation appalling. (Mar.)

This review has been corrected to fix a minor typo.