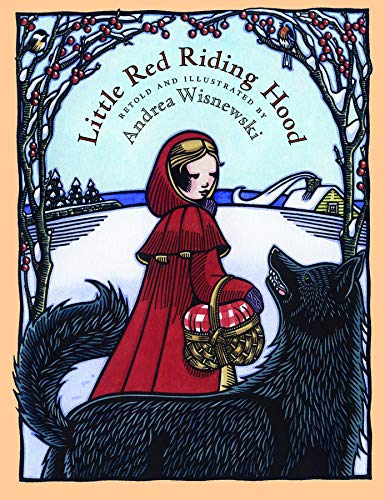 Wisnewski ( ) retells the familiar story, adorning it with graceful illustrations that emulate woodcuts, washed with saturated watercolors, and brimming with details. In her retelling, she recasts the nearby woodsman as Little Red Riding Hood's father and, arriving at Grandmother's, the heroine recognizes the wolf straightaway and uses the familiar questions regarding the odd physiognomy to buy time. Other details strike familiar tones: Grandmother is swallowed whole ("It had been a slim winter"), and the girl's father, after "carefully slitting open the wolf's stomach," stares gravely into the belly of the flayed but bloodless creature. (Flowered bed curtains spare his daughter—and readers—any implied gore.) Unfortunately, the narrative suffers from several overlong sentences (e.g., " 'Thank you, wolf,' she said and started down the path not noticing that as soon as she turned her back the wolf slid back into the trees and took yet one more of his shortest short cuts through the woods"). Children will enjoy studying the detailed artwork, from Grandmother's pets (a tabby hides under the bed while a ginger cat flees) to cozy interiors modeled on Old Sturbridge Village in Massachusetts (according to an author's note). The bookmaking's lovely, too: lupine footprints trot across the front cover (beneath the book jacket), and red gingham endpapers conjure both the cloth protecting Little Red's basket and Grandmother's cheery tablecloth. Ages 7-up.