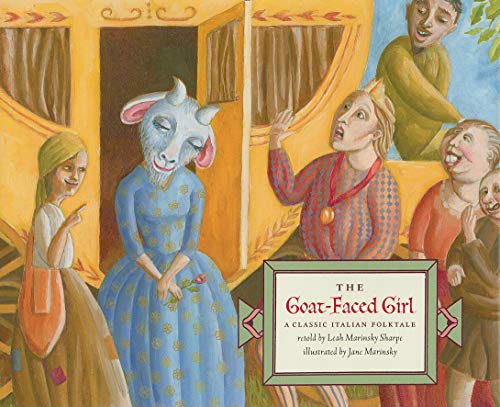 Rich storytelling and intricately imagined artwork make this debut a standout. Raised by a lizard (how's that for a promising opening?), Isabella is lovely but lazy, and her lizard/sorceress mother gives her the head of a goat when she becomes engaged to Prince Rupert. Repulsed, Rupert gives Isabella three sham tasks to get her out of the way. Her trials give her the resourcefulness she's lacked and the moxie to boot Rupert out when he confesses that her goat head turns him off. Sharpe's retelling maintains a smart, modern tone throughout (as a swaddled foundling in the forest, Isabella becomes “a tripping hazard”), while fairy tale references add spice: “[I]n one kingdom nearby, they made the girls sleep on peas. In another, the girls had to attend balls in glass slippers.” Marinsky's paintings, in the chalky, sun-bleached colors of the Italian renaissance, contain many small pleasures: the woods and flowers of medieval tapestries, the goat-headed princess licking cupcake batter off her goat nose, and a portrait of the shallow prince's just fate. A must for anyone who would rather be a sorceress than a princess. Ages 6–up.