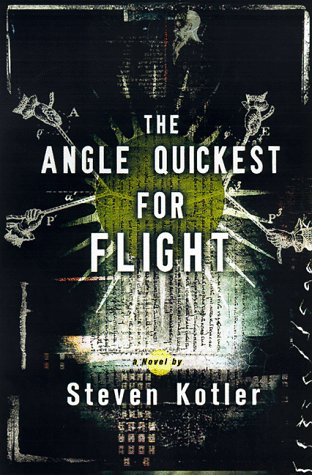 The Angle Quickest for Flight

The plot of Kotler's intriguing but often maddening first novel may perplex even the most patient reader, but what book-lover can resist a story about book thieves? Using the jump-cut technique now almost compulsory in mysteries and thrillers, Kotler takes the reader from New Mexico to Tierra del Fuego to Old Jerusalem, weaving together several characters into his complex if not quite winning story about drifters, a renegade priest and smugglers of precious documents. The mysterious Pena, an old Santa Fe woman, draws Angel, a 17-year-old runaway, into her scheme to locate an ancient Kabbalistic text, the Sefer ha-Zaviot, believed to hold a secret shortcut to heaven. Pena persuades Angel to accompany her to Mexico to find another Sefer-seeker named Padre Isosceles, but Pena dies upon reaching the padre's monastery. Angel flees to the States to find Pena's friend, smuggler Coyote Bl , who plots to retrieve the Sefer from the Vatican, although by then he knows that Padre Isoceles and his dedicated followers will kill any competitors. The story then moves on to rock climbing in California and to the depths of the Vatican library, and it is there that Kotler sets his most powerful scenes, depicting the Church's need to bury contrary beliefs. Along the way, Kotler dips into enough esoterica (the Kabbalah, I Ching, set theory, Sufism) to keep a curious reader intrigued, and the dialogue is always witty and cool. But the novel is overwritten, and the plot far harder to piece together than it should be, making this ambitious intellectual thriller less involving than it might have been. (May)
close
Details